The Better Me Project, Part II 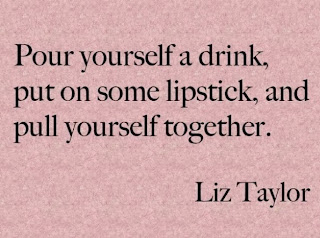 It is not so much that I can pinpoint exactly when "it" happened.  "It" was really more of a slippery slope and not so much of a running off the cliff with my legs spinning in mid-air a la Wile E. Coyote.

But I went over the edge nonetheless.  And on my way over the edge and right before I bailed-out, I ran my self-esteem and my motivation and my initiative and my finances, as well as my earning potential right off the road and into a ditch.

And from the outside looking in, everything looked awesome and in-control and totally like my shit was together.  Not surprising really because this is a skill that I have expertly honed to perfection--hair done; clothes impeccable not expensive or even especially trendy, but impeccable--big difference; face "on"; house clean; son sober; husband employed; mother-in-law NOT dead.

But the cracks were starting to widen and deepen and more sad eau de Darya would make a puddle on the vanity near where I sit with my feet in the sink to put my make-up on.  So, I had to go about setting my life straight.  I  just could not continue ricocheting my way through life like the little silver ball in a Pachinko machine because now I had my mother-in-law to take care of on a daily basis and a business to grow or at the very least make a decent living at and a marriage to keep fresh, exciting and new, which is no easy feat lemmetellyou.  Jesus, I am just lucky he is even willing to look at me twice after some of the shenanigans I have pulled or the spoiled demands I have made.

I decided that I couldn't be stuck in this same place for one more day.  Oh, hella no. So, as a promise to myself, I instituted The Better Me Project, Part I.  The Project is my promise to myself to become a more fully functioning grown-ass woman, which seems to be centered around me denying myself anything within my computer mouse's reach and the depth of my credit limit, which isn't really that deep so that really isn't that big a damn deal.  Trust me.

But there is more to it than that.

I am backing my life out of some of those ditches and treating myself honestly and with authenticity and more importantly with kindness. Because, I don't know about you, but I would never ever dare to speak or say out loud to someone else some of the crap I say to myself:  Stupid. Slow. Fat. Dumb. Lazy. Ugly. Bad skin and oh, God that hair. Stupid clothes. Too tall. Too old. Broke. Broken. Ungrateful. Egotistical. Selfish. Self-centered. Not thoughtful nor thankful enough. Disrespectful. Bad friend. Immature.  The list is long and boring and you get the idea.

There are a whole bunch of complicated rules:  Some that make sense to only me and some that people have already told me that they could/would never do, but because it appears that I have always had my shit together, it is of monumental importance that I get it back together and pronto, man.  At some point in your life, you gotta cowgirl up and you gotta pull the thumb out of your ass or the tit out of your mouth.

In addition to the previously mentioned no-shopping ban, The Better Me Project also includes:
I am eyeballing Good Friday as my shopping ban end-date.  No special reason other than I really do not have the wardrobe chops to go through summer without making some purchases and let's be honest, if I haven't learned that lesson by then, I probably never will and there really is no hope whatsoever for me.  I can be a fast learner when so motivated; otherwise, I have yet another subset of  finely honed skills, which includes being a lazy slug of a crappy person. But deep in the center of my being I do not believe that that is what it will come down to. I believe that I have learned a lot and I did find the root of most if not all of the evil in my life and I have already put in place corrective measures, as well as a new course of action.

More on that later, like, after Easter when I can feel a little less ridiculous about gloating. It seems only right to hold the gloating down to a shout during Lent.

Even if Facebook did ruin (((absolutely everything))) with their new algorithm, you can follow me at the xoxo Darya fan page, and if you are interested in creeping on me and whatever cockamamie outfit I capture in my 90-year-old office bathroom mirror, you can join my Instagram  @xoxoxdarya  but please don't forget the extra "x"--it's a long story.