Warning:  This post is gonna get all kindsa Catholic-y up in here. I know the Catholic church has hurt a lot of people and I do not like nor condone any of it--not one little bit, please believe that.

Because it is Holy Week and Easter, I want to say this now.  Because when something is missing and you actually have the knowledge of what that something is, oh hell, yeah, for sure, you are so far ahead of the game.

I just had to be Catholic.

Don't ask me how I knew; don't ask me why it had to be. And do not expect me to defend the Catholic Church because their shenanigans have been indefensible. Period.

My experience was and is about a faith that I have had my entire life, and a romance and a longing and a need--a deep, visceral in-the-core-of-my-being kinda need. It really is just that plain and simple.

I just had to be a Catholic.

At the age of twenty-eight as I was preparing to marry the second of my husbands, and after I had participated in two full years of instruction and I completed a "period of reflection, prayer, instruction discernment and formation" through the Rite of Christian Initiation of Adults, I became a Catholic and a huge balled-up knotted part of me that had been holding all it's air in my whole entire life took a big deep cleansing breath and began to stretch and relax. Ahhh, home at last. 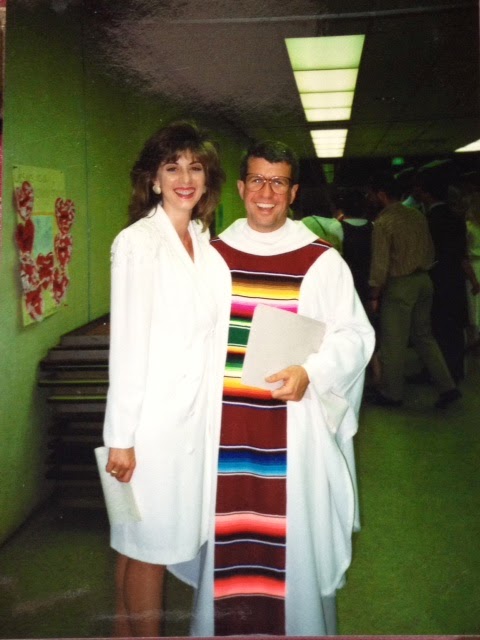 But because of some odd details associated with my prior marriage, I was not permitted to participate in communion at my own nuptial mass upsetting but not deal-breaking as odd as that may seem; however, I remained in full support of the Caveman's faith and life-long dream of marrying in his church and in his parish. This was a need of his that just had to be fulfilled. I did not ask him to explain it. He did not ask me to convert. The priest nor the church did not ask me to convert. I longed to convert.

And in all honesty, I do not do a house divided well.  I had tried to do it in another marriage and it was difficult beyond belief for me and disastrous for the marriage. I believe, that for me, all of my marriage and family oars have to be in the water and rowing for the same shore in the same rhythm. That is what our faith with the church's guidance helps us to do.  It enabled us to provide an education and a community and all the milestones of childhood to our son. Something the Caveman had growing up and I did not.  It was one item that would be checked off of the list of things that I would do differently with my child.  It was just something I HAD to provide.

Now, after twelve years of parochial education and catechism, the Hero says he does not believe in God that is not fair for me to say, maybe it is just the church that he takes umbrage with, I dunno.  That is okay.  If he does not, it is my suspicion that he will become a believer the minute his own child falls from heaven.  You just cannot witness that miracle and not believe in something greater--bigger--more powerful. If not, well, God gave him that same big beautiful brain to decide that important business for himself as well. We provided the tools, what he decides to build with those tools are completely up to him and his beloved.

As for the Caveman, most of  his communing with God is done regular foot on the deck of a 10-0  Bruce Jones longboard from Bolsa Chica to Huntington Beach to San Onofre. While surfing, the Caveman practices the art of gratitude--gratitude at Earth's gifts of immense strength and power and the graces it provides. In the water, straddling that Bruce Jones longboard looking at Catalina Island and the beautiful girls and the incredible sun and the sky above and feeling the warmth and the spray and tasting the salt and being with his dear friends and feeling the water cover his head as he duck dives under the swells to get to the outside sets, he gives thanks for the beauty of it all. He tells me that when he comes out of the water he is a new man. I believe he is living the sacrament of baptism each time he gets stoked.

This is Darya being Catholic.

Happy Easter and peace be with you. Namaste. Shalom. Aloha. All my love. And MWAH!