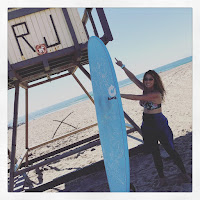 I "surfed" Huntington Beach's River Jetty this morning and in all honesty it felt like I hucked a 700-pound gorilla off my back.
I prefer the Seapoint's Jetty at Bolsa Chica. Do not even ask me why... Because nearly all the ugly stuff that has happened to me since I decided to get back on a board after 20-some-odd years has happened at Seapoint—my broken ribs and collapsed lung; bent and fractured fingers; multiple stingray shankings and slicings; concussions; split lips and black eyes. Yet, when asked my preference, I continue to beg the Caveman to load-up the boards and get in the car and drive up PCH and find parking and unload the whole shit-and-caboodle and hoof it all over the jetty's bridge.
And the really ridiculous part is all I really need to do is put my own board and my own ass on my own bike, and ride it all about a mile to the Huntington Beach side of the River Jetty. I am so ridiculous. 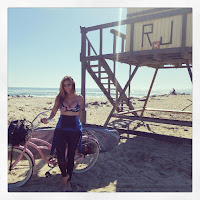 But see, the River Jetty has some scary-serious surfers; guys that surf with no leashes or practice 360s on top of the waves like they were Snoopy riding his doghouse roof. And real surfer girls who walk the nose and paddle on their knees like they were born on a board. And I am intimidated—I feel like there ain’t no place for a 55-yo lady grom in the line-up. Especially, a lady grom who is unwilling to paddle-up and take her rightful place in that line-up. And the thing about taking your place in the line-up is you gotta believe you belong—NO! You gotta believe you deserve to belong in that line-up—and I never seem to be in that head space. Yes, the Caveman is my downfield block and he paddles interference for me and he’ll snap anybody in half that looks at me sideways, but he also makes me take my own place and call my own wave, and he is long done pushing my fat ass into those same waves. I gotta be paddling for me, myself and I if I want anything that resembles a wave.
He also reminded me today in a very impatient manner when my whining fully ramped-up how “goddamn patient I have been with YOU and YOUR anxieties, Darya...” and he said “Darya” like my parents meant to spell it with 4 letters but goofed that up, as well.
In the end, I did it; I surfed River Jetty. It was not pretty but it got done.
So, suck it, River Jetty. The River Jetty, just like San Onofre State Beach are officially off my spreadsheet of anxiety-making shit.
Because if nothing else, I ain't no quitter.

xoxo Darya
Posted by xoxo Darya at 12:00 AM No comments: 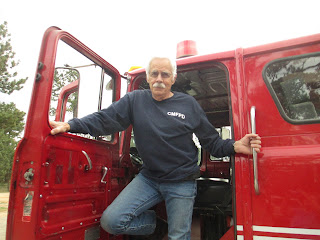