My Original Ride or Dies

I have had the unenviable reality of being uprooted and moved at some of the worst times in a developing young lady's life--5th grade, Freshman year and then again Senior year.  By my own free will, I married young and moved along with the military and had the Hero far from my hometown.  After Sgt. Airborne did his final deed of destruction, I returned "home" hurt and ashamed with nothing but the Hero, a car seat, a broken stroller and what was in the boxes I had mailed COD to my parent's front door.

I had no friends.

But Sister shared her friends and out of that crazy-assed cast of characters I found my next husband and his Ride or Dies.

The Urban Dictionary defines a Ride or Die as someone who is always by your side and will never leave.  They have your back no matter what.  They would do anything for you and will fight for you.  So, by definition alone these boys are my Ride or Dies, as well.  They have been there for the Caveman and the Hero and for me; I know for a fact they would Ride with me or they would Die for me--I just know that, forrealz.

They have babysat the Hero and dogsat my sweet Roxy girl; they have played softball on the same team as my Father and me; they have visited the Caveman and me in the hospital; they have picked us up from bars and broken down cars; they have helped us move into our homes; they have been there for the Hero's baptism and First Holy Communion and attended his fire academy graduation.  And I know that they will sit in the family pews right behind the Caveman and me on the day that the Hero is married and they will visit his wife when his own babies fall from heaven.  And then we will all switch places in those same pews when our own parents begin to leave us. 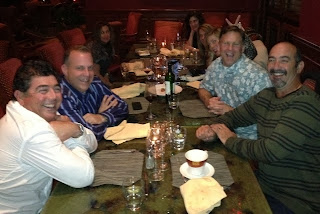 Papa Fig has been a staple in our little family for so long that I could have easily stood on his side of the alter when he married. Papa Fig would have been the Hero's official godfather at his baptism but the church got all high-and-mighty and said no, he had to be a "real" Catholic.  Whatevs.  He had the forethought to hook me up with his mother who became my mentor and future business partner and he made the hard phone calls when the Caveman's father died after 17 horrible whirlwind days.
Debts that can never be repaid.

I have slept huddled on the beach in the mist of Mexico with the The River Rat and we spent many Taco Tuesdays at the Red Onion and in line waiting to get in to clubs on Friday nights.  He was the one who lent me $3600 to get my boobs done and I made a visit to his shop every single month for 36 months to pay him back $100.  Not to mention the odd $20 here and $60 there just to get diapers or food or put gas in my little Honda Civic.  In all honesty, he owns a little bit more than a piece of my heart.
I love him for that!

Big Pimpin' is the baller that bails our sorry asses out of jail literally and hooks us up with all kinds a cool shit.  I have no proof, but I have my suspicions that the Caveman extracted a promise from Big Pimpin' that he would always look after me should something ever tragically befall him.  Big Pimpin' has no blood family of his own left on the planet--except for the adorable mini-me children that Big Pimpin' and his bride have made for themselves--making it even more poignant that we roll deep.

And we do roll deep just not as often as before.

Even when it has been over a year since we were all in the same room at my 12/12/12 birthday party--it doesn't matter.  Just like the River Rat's wife reminded me, "We are such good friends--just with gaps."  She dubbed us gap friends.  She is my Gap Girl.  She is the one I have known the longest and whose child is closest in age to my own.  We were single mom's dating hound dogs, but they loved us and we loved them and we made it work.  I even made her wedding dress!  The Princess Bride is exactly ten years younger than myself and is so beautiful and so much Big Pimpin's dream girl it is almost spooky and the CEO is just that: She is the CEO of her own majorly successful design firm and has blessed Papa Fig with the only thing he ever really wanted in this life--three of his own beyond-beautiful children.  I have been there for a few of these boss bitches' children's conceptions and I have been around for almost all their births.  I love them all like my own child.

This is the real deal, people; this is what life and love and friendship and growing up and growing old together is all about.  Take it from me, when you are not lucky enough to have your own Ride or Dies, you gotta manufacture them or go out and steal them from someone else.

And you realize how important they are to have and to take care of and to cherish and to ride or die with. 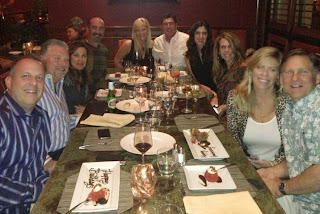 I sat in front of my computer--which by-the-by is really having some technical difficulties and even Blogger is feeling a little like it is out to screw me--and the blank page of my little bloggity blog mocked me.  I was thinking and typing and erasing and typing some more and trying to come up with some truly inspiring and awesome words of wisdom to bid 2013 farewell and to usher in 2014 with grace and inspiration.  Hah! The only thing that, in all honestly, I could put down was, "Suck it 2013."  Really, Darya?  Really.

So, as midnight approached and I started to feel a little panicky, I literally hammered this out on my iPhone with my two prematurely arthritis and tendonitis encumbered thumbs as we sat in the drive-thru at Alberto's waiting for our two bean-and-cheese burritos--we are ballers, ya'all.  2014 is my new beginning.  I am cutting the dead wood and I am no longer pushing an ever-growing tangled rope of shit uphill.  So, here is my Alberto's missive in all its glory.  If you follow me on Facebook, no new news here.  Bear with me; I will get it together.  Promise.  I feel big things a-poppin in 2014.


A few words as we end the year:

I have worked hard and I have hardly worked; I have squatted and thrusted and turned my body around; I have recommitted my heart to love, my mind to learning and my skin to the proper use of sunscreen; I have been hurt and I have set about healing; I have nothing to be sorry for but I want to do oh-so-much better; I have cried and sworn and cursed at God and I have made futile deals with the devil.  2013 has been sad and hard and brutal and I long for an easier more beautiful and tranquil 2014.