To say that I am a girly kind of girl would be an understatement—I like my nails and hair done and most of my spare time is spent knitting.  Cars, I don’t know so much—I do know that I like them red and cute and to at least look like they could go fast, but it’s not necessarily a deal-breaker if they don’t.  Anyone who knows me would never call me a “car kinda girl”.  So, it is funny that I would become such a smitten kitten over my 1969 Porsche 912.

We were like most young families in the 1960s, we weren’t poor, but Daddy worked and Momma didn’t, and if there wasn’t money for something then we went without it until we could afford it.  We only had one car at a time and Daddy usually drove it to work unless we had an errand to run, then Sister and I would hop into the back seat of the 1961 Chevelle or 1967 Mustang Fastback or 1969 Ford Cortina station wagon.  Over the years, in an effort to have a little extra during the holidays, Daddy would work evenings and weekends at a friend's Mobil service station and Momma would work nights on the assembly line at Mattel Toys. The year I remember most (and certainly, the year all the little boys in the neighborhood remember most), is the year she worked on the Hot Wheels line.  Suffice to say, my boy cousin had ALL the Hot Wheels—he even had the super bitchin’ carrying cases.  I loved those cases--nail polish would have fit perfectly!  That Christmas, Sister and I received a couple of the cars and some orange track (which like every other boy in the neighborhood, we nailed to the wall in an effort to achieve more height and ultimately enough speed to get through the loop-de-loop, but eventually we slapped each other in the small of the back with it on a hot summer day and in a fit of pique Mom took it all away).  I cannot tell you the cars Sister pulled out of  her stocking, but to this day I remember my 1965 convertible white Mustang with red interior and what I believe in my own heart was a red 1969 912, but let’s be honest, it was probably a 911.  Unto this world, a little Porsche girl was born. 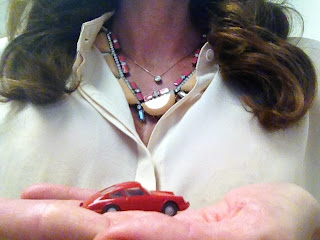 Fast forward to 2001, when at the age of nearly forty after fifteen years at a Fortune-500 company with a son getting ready to go to college, I was laid-off.  Now, I freely admit that any sensible woman who is nearly forty with a son getting ready to go to college would have come out of the free job-prep symposium freshly motivated with newly updated and printed resumes, hired a headhunter, had her hair cut into a respectable bob, secured a new career path and ultimately stayed on the freeway in a corporate-leased VW Passat.  Nope.  Not me.  Instead, this girl cut her hair boy-short and dyed it blonde, turned in her leased vehicle, sold all her suits and closed-toe shoes at a garage sale and—here’s the best part, people—took her severance pay and bought the most adorable big-girl-Hot-Wheel-912 that her husband could hunt down for her—and started her own business.  Oh, my, what a difference a car can make. 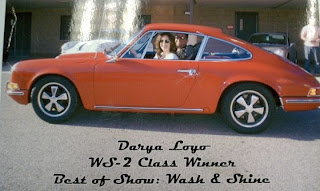 Basically, that car is the only thing that I own outright, but it makes me feel nearly worth a million dollars.  I absolutely love that car—I am beholden to nothing when I am in it.  It makes me feel prettier, taller, thinner, smarter and way cooler than any girl has a right to feel.  It is simple and sweet and smells like when gas smelled like lead and that was a good smell.  The seat belts aren’t retractable, so I am the only one who drives the car, partly because it is mine and partly because it takes Herculean strength to adjust them.  The car still has the original black California plates and Solex carburetors and forty-some-odd years’ worth of registration tags. I only have to make sure the gas doesn’t get too low or something old and cruddy will chip off in the gas tank and get into the engine (so says Mr. Mechanic Man) or that the oil puddle on the garage floor is still there, because, “if it isn’t leaking oil, Darya then it is out of oil” (so says the Caveman).  There is no air conditioning, so you always end up getting where you were going a little less fresh than when you left, but that is okay—I always need a few extra minutes to sit on the aluminum door sill and put my shoes back on because I can only drive barefooted!  It is in those moments that I realize how very much I adore this car and its simplicity;  I am connected to this car that was hand-built the same decade I was born.  I am still not a "car kinda girl"; I am a Porsche girl. 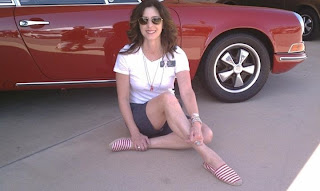