I Forgot to Never Forget <\3

Today was "off" from the get-go: I woke up confused by the Caveman's old extra emergency phone's low-battery chirp at 4:30am after he had already left for work but I could hear his work truck as he was parked the wrong way in front of the house; there was more confusion with me barefoot in the street in my pajamas in the welding rig's headlights handing him the wrong phone while he fumbled for forgotten sinus infection medicine. "Just plug it in and go back to bed, Baby."  By the time I got back in bed and the Caveman left for work, again, the sleep just wouldn't come back. I turned on the TV but I couldn't "see" the middle of the screen--tired eyes.  Way to be positive, Darya.  It was the aura before the migraine. The calm before the storm. Dammit. Gave myself an injection of Imitrex. Nausea. Vomiting. Tears.  Eyes slammed shut.  Finally, felt a bit better; got up; got a shower; felt a little more better.  Ran into my mom-in-law downstairs; the bus forgot about her and she needed a ride to her senior center arthritis exercise class.  No prob. "What's the matter, mijita? Are you OK."  I smiled; I would be fine--feeling better already.  Liar.  I cried putting on my foundation, my eyeliner, my mascara and while flatironing my hair. Migraine was better but maybe the Imitrex took its toll making me kinda off kilter.  Maybe.  Drop Mom-in-law off at the senior center but cry trying to get to work and inexplicably go to Staples instead where I wander and cry some more and the staff just follows and stares. I honestly think they wanted to call someone.  Finally got home and for the first time all day checked Facebook.  Oh, my God, my heart sank--there it was. Plain as day; the scream was so loud in my broken head.  A friend had posted,
"Never Forget 9.11.01". 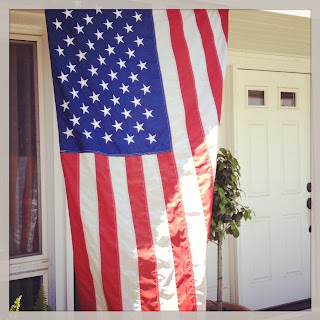 But, I had forgotten; I didn't remember.  Exactly, what everyone was saying NOT to do I had done. It felt like the most egregious of failings; a patriotic failing.  For crying out loud, my son is a firefighter paramedic; my first husband died after serving stoically as a Special Forces Arabic-Egyptian linguist (98Golf for those who know) during the early and mid 1980s--my sensitivities are real and palpable and me who has remained an army wife even though I am now a pipe welder/steamfitter's wife, had forgotten. I had failed.  I instantly, intently and intensely said prayers of remembrance and forgiveness and wiped my tears and texted the Caveman and hung the flag and said another prayer of thanksgiving and felt a very little bit better.

But as the day wore on,  I felt an odd relief--my cerebrum may have forgotten, but my heart, my soul, the thing that makes me me and will pass last from me on the day I close my eyes for forever had remembered.  I just didn't know how to "read" my heart's calendar.  In a way, formal thought had protected my still broken heart and wounded soul from those horrible memories.

It was good to realize that I had not forgot to never forget.