This Day Memorializes A Lot

There are three or four days that come along during the year that completely throw me--I just do not have the presence of mind when I am in their throes to realize what is going on yeah, kinda like PMS. I get anxious and weepy and a migraine may or may not be involved and there is definitely tears oh yeah, mos def--tears.

At some point my attention gets drawn to the calendar and I realize that it is April and it was my first husband's birthday just a few days before or it is August and it would have been my 33rd wedding anniversary to Sgt. Airborne just that last week. And the ultimate of all my tizzies, my I-forgot-to-remember-what-everyone-was-telling-me-to-never-forget meltdown over last year's 9/11.

So, when I realized I had been feeling distressed, I automatically chalked it up to anxiety over my recent job change and the waiting game that comes with creating a new book of business. Then, I started to see the snarky little e-grams on Facebook telling me to have a Happy Memorial Day Weekend. Happy? And then my generally restless mood, went from zero to completely and acutely pissed-off in, like, no seconds flat.

Really? Is this what everyone thinks this holiday is for--that Memorial Day is about a BBQ and a beer and a third day off in a row and the Old Navy Item of the Week? If so, that pains me greatly, like down to the marrow of my bones. Because I know differently.

For those who do not know, I was an Army wife. Not for long in the grand scheme of time, but long enough to make a grand enough impression on me. Long enough that I find nothing less than absolute respect and gracious admiration for our veterans, as well as our active duty servicemen and women, to be highly offensive and completely indefensible. Oh, I do not want to debate the better president or who is in charge of congress or the house or the military budget or whatfuckingever. I am talking about sons and daughters and brothers and sisters and aunts and uncles and men and women just like you and me making the greatest sacrifice of all for the good of the many. For us; as in, the U.S. 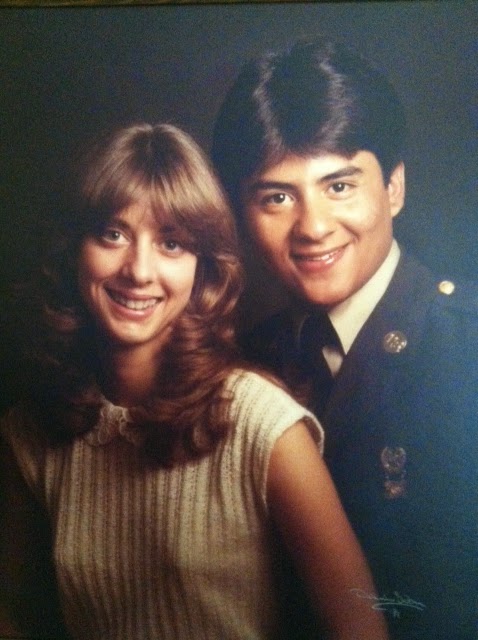 Sgt. Airborne and I arrived at Ft. George G. Meade in Laurel, Maryland, on December 6, 1981, and Sgt. Airborne reported for duty to the 311th Military Intelligence Battalion, Company C, and went to work at NSA, the National Security Agency, as an Arabic-Egyptian linguist with a Libyan dialect a 98Golf for those who know or even care to know. Do your math people, this was 1981--Gaddafi, helloooo, McFly.

And from that first cold wet day in March 1982, when ground was broken for the Vietnam Veteran's Memorial, better known as The Wall, Sgt. Airborne and I went into Washington, D.C., with another married couple from Ft. Meade and our boys wore their uniforms. The boys did this on Memorial Day and Veteran's Day as we paid our respects, not only at The Wall, but at all of the memorials throughout Washington, D.C. Now, maybe because I am old enough to remember hearing the body counts on the 6 o'clock evening news and seeing some of the older neighborhood boys not come home from fighting in Vietnam or maybe just living near enough to be in Washington, D.C., at the time of the building of The Wall at a time when our husbands still served with soldiers who had served in Vietnam, I identify so closely with this particular memorial and it resides in a place so deeply rooted and special within my heart as to be a part of me.

I have just very recently renewed my friendship with that other boy from Ft. Meade that is a story for another day--out of deference to him and this "holiday", and also because I just cannot seem to write the right thing right now. But in our conversations, this California beach girl, pipe welder/steamfitter's wife and firefighter paramedic's mother is getting to know that young Army wife all over again, and I am thankful to that boy for a lot of things this Memorial Day. I am thankful for his service on my behalf and we have talked about that both in broad strokes and in fine detail. Mostly, I am grateful to this new man I am meeting again for the first time, and for him seeking me out and befriending me once again. And like the Caveman said, "Maybe he needs you as much as you need him, Darya." I pray that is true.

Selfishly, in my heart of hearts, I am just so very glad to have a friend who has known me since I was a 19-year-old newlywed fresh from unhooking the U-Haul trailer and in-processing where we both shared our first permanent party post. For now, just know that I have missed him immensely--more than even I could have believed or imagined. With him comes a little bit of my own tribe; a tribe that has known me longer than anyone but Sister; a tribe that I felt so proud to be a part of and never really properly mourned the loss of because I was so damn busy getting down to the business of surviving.

In honor of all that has come before and all that will go on, thank you, veterans and servicemen and women, thank you for your service and your sacrifice. You all mean the world to me, and especially, too, to that other boy from Ft. Meade.

So, as you can see, this Memorial Day memorializes a lot for me