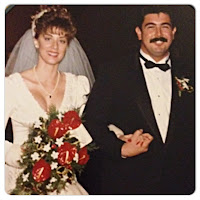 On December 1, 1990, the Caveman married the Hero and me.  We were married at the little Catholic church where the Caveman had taken his First Holy Communion as a second grader, and later where I converted and took my First Holy Communion and Confirmation as a 28-year-old-grown-ass woman.   It was a nuptial mass that was intimate and simple and afterwards we had a helluva party--we are good at that part.  We call it our Family Anniversary because that is the day that we officially became a family--pretty clever stuff, huh. 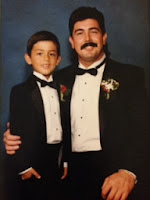 But when I really think about it, becoming a family actually started a few years before that day as I was putting the Hero to bed one Friday night.  Generally speaking, I didn't go out until after he had been put down for the night.  And on this particular Friday night as I was laying there talking with him or reading to him--fully made-up and dressed-up and ready to slide out from under the covers and sneak out the door to Benigan's or The Red Onion the exact moment after he fell asleep--and he asked me why he never got to have a date night.  Huh?  You wanna have a date with us?  The Hero was probably three-years-old and he was in daycare full-time and the Caveman was a first-year apprentice and I worked nights and from that one simple and honest question Family Date Night was born.  We chose Wednesday because it was pay day.  We chose Sizzler because it was cheap and close and the Earth wouldn't stop spinning on its axis if something got spilled or there was an emotional meltdown, but you had to sit at a table with silverware and a cloth napkin and there was proper table conversation about the workweek and the happenings of our lives.  The Sizzler--as well as the dining table at home--is where the bar was set; where the Hero learned to sit down and speak up and to eat like a human being and to say please and thank you and generally not act like a little punk. 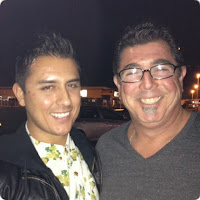 Looking back on those Family Date Nights, I realize how important they were to us becoming a family even before we were a family.  It is a tradition that stays with us to this day.  The Hero now lives in LA.  He comes down once a month for date night with me and once in a while the Caveman joins us and we have Family Date Night again--or still.  We will do this Sunday night on the occasion of the 23rd anniversary of our little family.  And it will be a beautiful thing--to sit there as adults and speak of our workweek and the happenings of our lives.