We.  And by "we", I mean the Caveman, decided that having an entire bottle of homemade lemoncello on the bureau next to my bed was not the wisest of my life's most recent decisions.

He ain't judging.  He never does.  He's just saying.  I like that he says so. 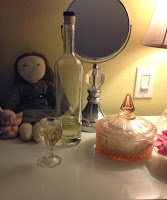 PS - The fact that it is not an entire bottle of lemoncello further illustrates his point.