The Coffee and The Flag

Like most mornings, I am already pissed off about something before the sun comes up--I say this metaphorically of course because we all know that I am not usually up before the sun or even really before Good Morning (Insert Your Hometown Crappy Morning Show Here) is long over; however, since the Caveman now has a 5:00am start time in LA and his alarm goes off at 3:15am or who the hell really knows when its all just a blur to me. Be that as it may, my contribution to this morning ritual is to be awake enough to turn on the coffee pot. Yes. After being coffee-and caffeine-free since 1996, we now need caffeine.

And, yes... I, actually get out of bed, comb my hair and brush my teeth or at least swish around some Colgate something-or-other-mouthwash and ((((TURN ON THE COFFEE POT)))).

Then, I sit perched on the edge of the barstool that really only me and the cats sit on while the Caveman packs his lunch and I make small talk. You know, so he does not feel lonely and so he is forced out of his own mindful reverie to listen to me prattle on about stuff, like, "Oh, look at Johhny Kitty! He looks just like a loaf of bread when he puts his paws and tail just like that. LOOK!" Or I talk about so-and-so and what-and-what, and mostly he just nods probably wishing I was still in bed where nothing is really coming out of my mouth ifyouknowwhatImean ::wink wink::.

That all being said, that has very little to do with why I am spitting mad this morning. And at the risk of turning this into a confessional I will tell you:

I left the flag hanging outside all night long. God, I know. I know.

Great care goes into our flag. It is not an exceptionally expensive flag nor is it an especially high-flying flag, so to speak. We simply hang it straight down--no pole; no dedicated light; no nothing, just our genuine love of that flag. That is where it has resided on appropriate flag days since we moved into this house--nearly 20 years now. We had another flag, but we actually wore it out, and the flag we have now is the flag that was in the meager belongings of the Caveman's father's found after he passed away.

While the Caveman's father never served in the U.S. armed forces, he was an immigrant to the United States, and like most immigrants, he was exceptionally proud of the American flag and his legal citizenship, which when we did the math was greater than the time he spent living solely in Mexico. He was proud of both his birth country and heritage and his language, as well as his legal immigrant status in a state that has such a tenuous relationship with her illegal immigrants.

So, this is the flag we fly. Evidently, even at night...even when I have to stand in the planter in the sprinklers in my pajamas to take the flag down before the sun comes up or my neighbor who works mids as a longshoreman catches me lurking in front of our house. Ugh... 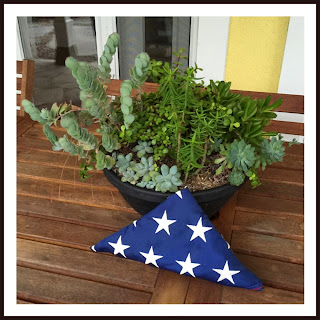 Regardless, once the flag comes down, I do a simple folding maneuver that I learned in another lifetime and that I have done for years and that results in the flag looking reasonably proper by most standards, I mean, I ain't no Eagle Scout or a Sergeant Major so don't bust my balls, I am doing my very best for a real OC housewife.

I want to do it correctly. And I want you to do it correctly. Because it is very important, and it is the most obvious and surest way for us to show our support to our troops and their families for their sacrifice whether we agree with the politics of how they got to where they are deployed or placed or God-forbid interred.

Evidently, the most important thing is that in the end, there is no red showing and there are four stars pointing upward across the bottom. This is the real way you fold a flag. Make yourself a cup of coffee and get busy.

It will look so nice when you pull it out and hang it up on the Fourth of July!

How to fold the Flag

To properly fold the Flag, begin by holding it waist-high with another person so that its surface is parallel to the ground.

Fold the lower half of the stripe section lengthwise over the field of stars, holding the bottom and top edges securely.

Fold the flag again lengthwise with the blue field on the outside.

Make a triangular fold by bringing the striped corner of the folded edge to meet the open (top) edge of the flag.

The triangular folding is continued until the entire length of the flag is folded in this manner.
Step 7

When the flag is completely folded, only a triangular blue field of stars should be visible.