I Am Anxiety's Bitch, Part II

In all fairness to my amazing friends and readers and supporters who have been so kind as to follow along with me on my journey to become a more happy and fully functioning grown-ass woman, I just could not make you'all read about ALL my anxiety ALL at once.

So, I busted it out into two parts.

If you feel lost or have forgotten, either by chance or by choice, about what has already gone down, feel free to read through I Am Anxiety's Bitch, Part I and join me back here. I ain't going nowhere.

In an effort to help me understand what anxiety really was, Dr. Headshrinker brought out his well-worn volume of the DSM-IV-TR (the Diagnostic and Statistical Manual of Mental Disorders, Fourth Edition, Text Revised, nice, huh),  and together Dr. Headshrinker and I looked it up and sure as shootin' I had 9 of the 13 symptoms listed necessary to meet the criteria for a bona fide panic attack. And honestly, what a relief to know I was not just being all Darya-y. You know, all nervous-y and twitchy and migrainous and easily made to vomit.

Like all things that happen, they happen for a reason, though much of the time I really have no earthly idea what that reason is; however, I have learned not to question that--to just "be" as a new old friend has repeatedly said to me. And they happen in groupings of instances. In the span of two days, I had three very separate conversations with three very different men about this exact same topic. The fact that they are all men is not purely coincidental as I have always been able to speak more freely with men and most of my deeper friendships have been with men--namely, my husbands. As part of The Better Me Project, I am trying to have more female relationships. That is an entirely different blog topic for another day, believeyoume.

Anyhoo, one of these men explained to me that he loved having those feelings of uncertainty when it came time to do an especially difficult or mind numbing CrossFit WOD. He related that he so rarely feels that sense of uncertainty and rush of adrenaline. And I know what he does for a living and I would think his days would be filled with the thrill of adrenaline. He spoke frankly to me about utilizing that heightened sensation to make myself brighter and quicker and more alert. I have trouble acting normal when I am nervous so that did not seem very relevant to me.

My second conversation was a text thread with a friend; whereby, he told me that he had had a near-perfect day riding his motorcycle fast enough to scare the soccer moms on the way to his uber-sleek and fast fishing boat, and he opined that if he had just been able to make a jump out of an airplane, it would have been a grand slam of a day.

And then, later that same weekend, I sat on our backyard garden wall while the Caveman was working on the roof and I asked him if there was anything that scared him, like, so scared he might feel paralyzed or stupid? The Caveman said that the only thing that scares him is the thought of not coming home to me at night and that makes him work harder; to be more alert be alert; the world needs more lerts--an old, dumb joke few will get.

Let me break it down for you: What I perceive as fear and anxiety, they process as feeling alive or as an adrenaline rush. I think I may die and they are trying to feel this way on purpose because they do not feel this way enough of the time! Da fuq. CrossFit WODs; jumping out of planes; riding motorcycles super fast; prepping a witness; walking high up in the sky; welding on something hot and high or cold and deep in the ground deep enough that the sides could cave in and I would never see one of those men ever again. I do not need to be jump qualified or stand below a helicopter lifting something insanely heavy overhead for my adrenaline to make a sound in my ears. I only have to think about how I will pay my house or how I will tell the Caveman that his mother is too much for me to care for properly, and then the panic rises like bile from my stomach and burns the back of my throat.

As I sat on the planter in the backyard explaining all this to the Caveman, I asked him again the same question. He made me come up on the roof and sit down next to him and we looked out over the house we have made our home and I could feel the salt air in my hair, and he very patiently explained to me like he was speaking to a small retarded child, "I am only afraid of not coming home to you at night, Darya, and that just makes me pay more attention at work. That is it."

I told this last part to Dr. Headshrinker. He so simply said to me like he was speaking to a small retarded child, "The Caveman does not have an anxiety issue, Darya."  That sounds oh-so-very-simple, but in my pea-brain it sounded like something Copernicus or Einstein or Alex Trebek might say. It was so simple as to be beyond my comprehension, but to be fair, that happens to me a lot.

Hi, my name is Darya. I am anxiety's bitch.

This item has been added to the spreadsheet: Break-up With Anxiety. And Dr. Headshrinker and I have a plan--a very good, thoughtful plan on how to get me over some of the anxiety-inducing bumps in my day and my nights.

For right now, I have just been practicing my surfing because one Fourth of July a long time ago at San Onofre State Beach I was hit in the face by the surfboard rail in a major way and it broke my nose and separated it from my skull and split my lip and gave me a concussion and I had to get stitches and it was all very bloody and emergent and, well, anxiety inducing. I did the math over Father's Day weekend this year when we were camping and the Caveman was surfing at San O, and that is when I got back on that surfboard--I got back on when I realized that that was nearly 20 years ago. That was much too long to be so afraid--especially of something I love so much. 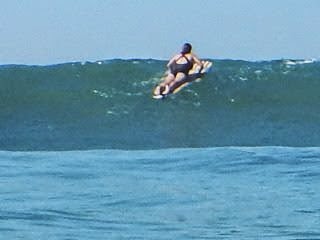 Break-up With Anxiety--I think we will be working on this one line item for a while but I think it is time. It is my time. And I believe I am totally worth my time.

And I can see Dr. Headshrinker dreaming of a week in Waikiki off of this little gem alone.